Beside the southern façade of the church of Santa María la Real, quite an example of Romanesque iconography, the Aragonese Way says goodbye to the River Aragón. Meanwhile, the pilgrims’ road advances toward Rocaforte, a perfect settlement for Saint Francis of Assisi, who stopped here during his pilgrimage to Compostela. Under the shelter of Salajones mountain range, the chapel of San Bartolomé imposes an unhurried rate until reaching the top of Aibar and continuing along Izco mountain range to the village of the same name.

The cereal Ibargoiti Valley starts in the last third of the day, a tiring section of endless agricultural tracks that have as background the lady of Alaiz, which is none other than the unmistakable Higa de Monreal with an altitude of 1289 meters. The village of Abínzano, preceded by its parish church of San Pedro, and later Salinas, at the edge of the River Elorz, precede the beautiful riverbank woodland that gives access to Monreal, the place of Mons Reellus that was cited on Codex Calixtinus like an end of stage.

From the albergue de peregrinos, located at calle Enrique de Labrit, we pass next to the Gothic church of San Salvador, built at the end of the 13th century, and link easily with calle Alfonso El Batallador. We move forward at the feet of the Vallesantoro Palace, which houses the cultural centre since 1970, and shortly after we reach the junction with calle Mayor, which we take on the left to the church of Santa María la Real. Its facade, illustrated on the pages of every fine art book, is a pictorial treatise of the medieval style. It’s worth a break certainly. We cross the metallic bridge over the River Aragón, saying goodbye to it, and take the NA-8603 to the right towards Pamplona. Shortly after we pass the petrol station and soon after we turn left to Rocaforte, taking the NA-5401 (those who want to take the Foz de Lumbier variant ignore this detour and continue along the NA-8603 to Liédena) (km. 1.2). We follow on the asphalt for 300 meters, surely smelling the stinky fragrance of the paper industry of Sangüesa, an then we take a path at the right roadside that goes up soon after to Rocaforte. The Gothic church of Santa María defends this village that was the first settlement of Sangüesa, before it was founded on the banks of the River Aragón.

At the entrance of the village there is a resting place with several benches and a fountain. We take a paved track, also coinciding with a mountain bike route and the local track 183. The track moves between vegetable gardens full of lettuce, cardoons and chards. Meanwhile, we have a look on the right where San Bartolomé chapel is. It was a convent inhabited by Franciscans until the 19th century and where St. Francis of Assisi rested during his pilgrimage to Compostela around 1215. We cross a stream and we pass by the drinking fountain of San Francisco, where there is a peaceful area with tables and several barbecue grills. The urban area leaves us in the presence of a arable land surrounded by boxwood and hawthorn. On the right hand side stands out the wind farm of Salajones and soon we reach a waymarked place as Fuente de La Padul, which indicates 4.9 km. to the top of Aibar pass and 22.9 km. to Monreal. About 300 meters we pass by a farmyard and 400 meters later next to another one, with a drinking fountain at the foot of the track (km. 5.1).

The slope is barely perceptible as we walk along the wide open space spattered with some vineyards. Later, a grassy path leads to cross over a stream and shorlty after we arrive at an area provided with a drinking fountain, where the MTB route turn right and the Salacencos route turn left (km. 7.2). However, we continue straight on while the path gets narrower, complicating the advance of cyclists. After a line of poplars we finally reach the N-534, that we cross by an underpass. 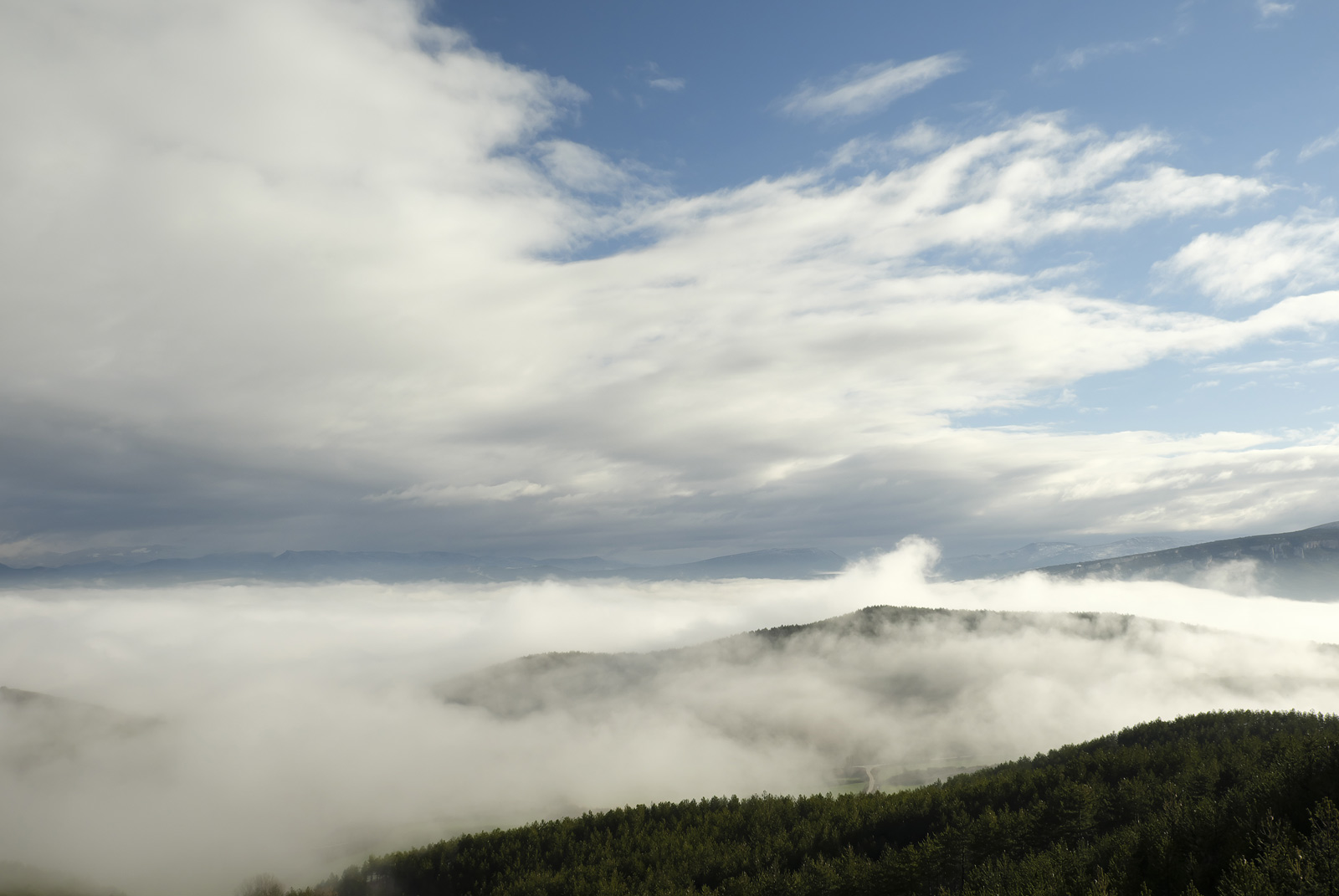 Wide landscape hidden under the clouds taken from the Aibar Pass. | CAMINOS PEREGRINOS

After the underpass we go up to a gate. We surpass it and follow a path that advances over the N-534 before a wide panorama. Down to our right it is located the village of Lumbier and the nearby Mount Arangoiti (1353 m), sentinel of Leyre mountain range. Later, along the repopulation pine forest, we descend several wooden steps until a metal gate. Shortly after there is another one and we end up descending to a track (km. 10.5). Watch out! We take it to the left in slight climb as we see just below a pond for recollecting water. Pay close attention! 100 meters after taking the track we left it on the right side. Then we continue between boxwood and small woods. After 300 meters, we cross a track and continue straight on for more than a kilometer until connecting with a wider track. We take it and turn left in 200 meters (this point is where the pilgrims who have taken the Foz de Lumbier variant link with the main route (km. 12.1).

The Aragonese Way continues its mountainous progress across Izco mountain range, surrounded by Atlantic and Mediterranean landscape, going up gradually on a track that advances on the boundary of the forest. 1.7 kilometers later we will find a gate that indicates Olaz, a place name that recalls the hamlet abandoned in the middle of the 15th century (km. 13.9). We continue on the trail, sometimes accompanied by the buzzing of the wind farm, as regular as a washing machine. We will surpass a livestock building (km. 15.1) and a cattle grid one kilometer later. Then we will reach the highest point of the stage.

We follow the track to the right and we let the waymarks guide us in the descent. The road to Izco, less than two kilometers away, opens up the doors to the Ibargoiti Valley, which stretches westward between Izco, Tabar and Izaga mountain ranges and where Mount Higa de Monreal (1289 m.) stands out in the distance. After leaving the pine grove, we take a long straight line of more than one kilometer that advances at the left of NA-2420 and A-21 Highway; this leads directly to the village of Izco, which we enter crossing a stream next to a wayside cross. The albergue de peregrinos San Martín is located at the foot of the fronton. The bar doesn´t have a fixed timetable and it could be open but the pilgrims’ hostel is CLOSED nowadays!

Those who continue to Monreal should arm themselves with patience without looking too closely at Mount Higa de Monreal (1289 m.), the lady of Alaiz mountain range. Without any hill that shades it around, its silhouette is distinguished from many points of Navarre geography. A couple of kilometers separate Izco from Abínzano, where the parish church of San Pedro (13th century) greets at the entrance. Beside it we find a drinking fountain.

There is about an hour’s walk between Abínzano and Salinas de Ibargoiti. After the parish church we turn right and after few meters on the left, facing another endless gravel track. On the right hand there are some agricultural buildings, while we set the course northwest towards Mount Higa de Monreal. Cereal fields, undulating, merge to the south with the mountain range and its wind farm, and we always move forward, ignoring the tracks that turn up here and there. Some rows of poplars sprout on the right side, beside a stream. The slope becomes much more favorable and the Aragonese Way crosses the barranco de los Sesur (ravine) (km. 22.5). The track ends at the road that links Zabalza with Salinas (km. 24.4), which we will take to the right for only 100 meters, disconnecting from it by a track that advances over the road. It will take us to cross the beautiful medieval bridge over the River Elorz. At present we must go directly to Salinas de Ibargoiti, where there was a pilgrims’ hospital that was run by the Order of St. John of Jerusalem. This village had up to eight salt lakes, therefore its place name. 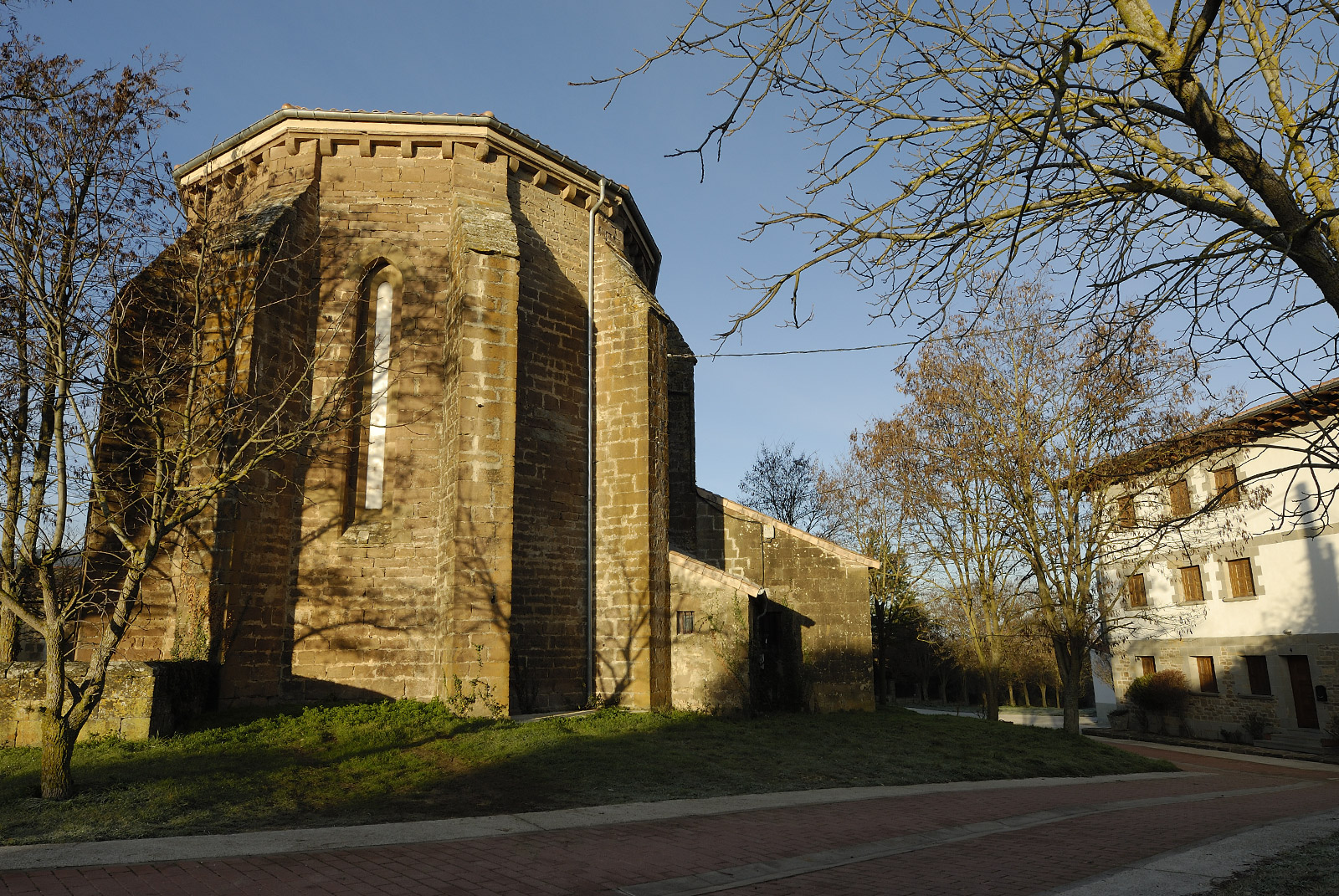 Before arriving at the Gothic church of San Miguel we turn left, crossing in few hundred meters the River Elorz. The last stretch until Monreal will leave a good impression on us since the riverbank woodland provides a shady shelter. At the entrance of the village of Monreal (Mons Reellus) quoted on the Codex Calixtinus as end of stage, we cross the river by a Gothic bridge with a semicircular arch and other pointed. Just after we continue straight along calle Santa Barbara and then we turn left on calle de la Corte. A flight of steps leads directly to pilgrims’ hostel, which has a clothesline and a small stone table in the back yard.

Monreal from a pilgrim`s eye view

One of the attractions of this Navarre quiet village, whose place name comes from Mons Regalis (Monte Real, in reference to the fact that these properties were one of the hunting scenes of the Navarrese kings) is the Gothic bridge over the River Elorz that we have crossed at the entrance of the village. It consists of a pair of arches, one of them is semicircular and the other one was designed in pointed style. If we stroll along the streets of Monreal, which was benefited from the privileges granted by García Ramírez in 1149, we will observe as part of the Jacobean Route (calles Santa Bárbara, El Burgo and Mayor) retains its medieval appearance. In addition, there was a Jewish quarter where the calle Cuchillería is located. The hill of the old and disappeared castle rises over the church of La Natividad, emerging at the beginning like a simple defensive tower and ended up becoming in temporary residence of Navarrese monarchs. On calle El Burgo it is possible to take a path that leads to the ruins of the tower and towards an underground cistern that appeared in some excavations made in the sixties. 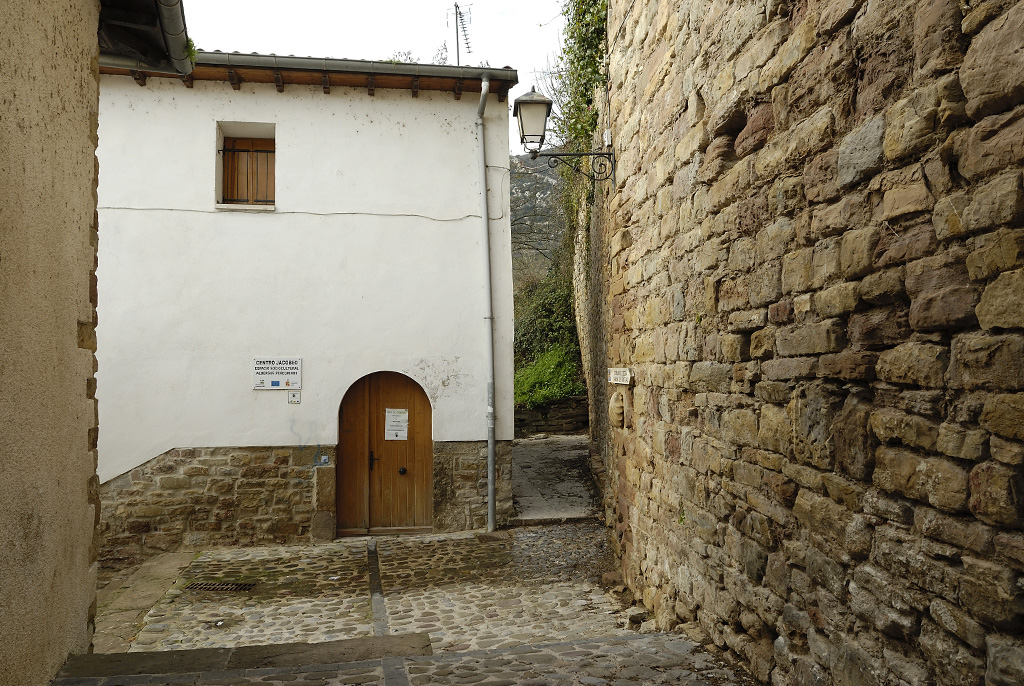